Thanks for signing up for the workshop. We are DIY enthusiasts and big fans of Micropython.

The workshop materials are written using the MicroPython Documentation for ESP32.

The ESP32 in the kit comes with the firmware installed on the hardware. For future firmware updates, the latest build of Micropython is available from here. (Todo: Tutorial on installing the firmware)

For the sake of convenience, we will be using the Thonny IDE to program in Micropython.

Mac Users: You can install Thonny by using pip (shown below). You will also need to install CP210x drivers for MAC.

After installation, add your user id to the dialout and tty groups.

Note: You can program in MicroPython just using a text editor. You could even work off the Micropython Interpreter. Thonny makes your life easy by allowing you to load programs easily.

Once you have installed Thonny, launch the IDE and configure it for ESP32 on MicroPython as follows:

We are all set to get started with programming in Micropython

Let’s go ahead and print Hello World from the Micropython interpreter:

It should print Hello World! to the screen.

Before, we get started with hands-on programming, it is important to familiarize with the hardware. The board used for the workshop is the ESP32 Development Board. The schematic for the board is available from here. The image below describes the peripherals of the development kit. It describes the function of each pin:

We will be merely scratching the surface but we have included resources at the end for further learning.

In the world of embedded devices, a hello world example is blinking an LED. According to the schematic, a blue LED is connected to the GPIO pin 2. We are going to blink an LED with one second interval. We are going to work on this example from the MicroPython interpreter. Let’s get started:

In our example, we were working from the MicroPython interpreter. The program will stop running if you hit the reset button or power off the ESP32. Let’s write the code sample discussed above as a script. Putting it all together: 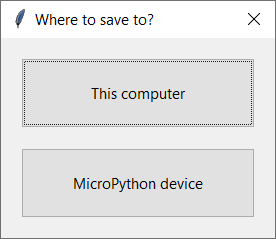 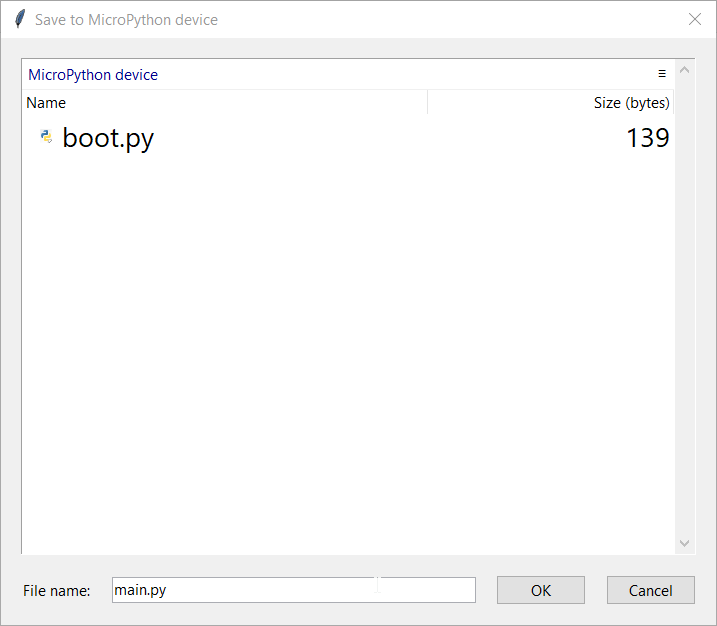 You are welcome to skip this example but you get to breadboard a blinky circuit using the ESP32. For this exercise, we will need the following items (provided in the kit):

Connect the LED to GPIO pin 23 using a 220 ohm resistor (to limit current) as shown in the figure below:

Now that we have completed the basic example, let’s move on to the next section!

In this section, we are going to detect button presses. Connect a button to the ESP32 as shown in the figure below:

In this section, we will learn to use the Analog-to-Digital Converter on the ESP32. Currently, the ADC drivers are only for pins 32-39 (Refer to the pinout diagram above). This is due to a conflict with Wi-Fi interface driver. Connect a potentiometer to pin 32 as shown in the figure below:

Note: The snippet for the ADC is from the Micropython Quick Reference for ESP32 documentation.

Turn the potentiometer knob and see if the voltage varies.

Neopixels are RGB LEDs that can be controlled individually. In case you are not familiar with Neopixels, here is a guide from Adafruit. Neopixels usually are connected in series. In this exercise, we are going to be running some light effects on a single neopixel. Your kit contains a single neopixel.

The neopixel drivers are available with the MicroPython binary. Connect your neopixel as shown in the figure below:

It is also possible to create some light effects using neopixels. For example: An RGB fade in/out light effect can be created as follows:

Exercise: Try writing a light effect where the neopixel fades into different colors in cycles.

Your kit comes with a VEML6070 sensor. We will calculate the UV index and publish it to the cloud. We will be making use of the ThingSpeak platform.

Note:: The ThingSpeak code samples were built based upon this tutorial.

If everything was set correctly, you should be able to view your data on ThingSpeak (shown in the snapshot below).

If there are problems reading the temperature from the sensor, check your connections and ensure that there is a pull-up resistor on the clock and data pins.

Exercise: Create a new channel and upload the temperature and humidity as separate fields to ThingSpeak.